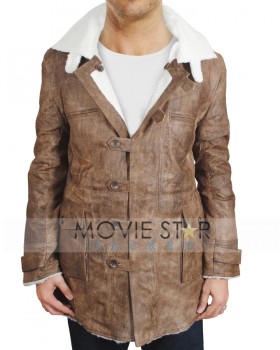 Beholding this Tom Hardy Coat is vowed to reckon that the origin of it has got to be as rousing as this Tom Hardy Bane Coat appears to be! Originated from the concluding installment of the Batman movie series – The Dark Knight Rises (2012); this Bane costume is surely a piece of fashion, which comes into view very seldom. This Bane Jacket was carried by Tom Hardy reprising the role as – the Bane, a wacky and vicious villain standing again the superhero – Batman. This The Dark Knight Rises Coat is made up of distressed brown Lambskin leather, which cements its figure as a symbol of groove and audacity. Premium Shearling has been utilized to line this Tom Hardy Jacket aimed at slathering this piece with a bonanza of extravagance and glamour. This Tom Hardy Bane Coat has been made by veteran leather craftsmen making it a noteworthy exemplification of substance and finesse. Featuring a broad Shearling lined collar, loop-style button closure, strap button cuffs style and four external pockets with two inside pockets; this Bane Jacket Coat Tom Hardy stands even taller than a dream-come-true kinda fashion apparel & it is really what it’s gotta be!
About the movie – The Dark Knight Rises (2012)
The Hollywood movie, “The Dark Knight Rises”, was released back in 2012. Tagged as a Superhero Film featuring DC Comics character - the Batman, this movie was directed by Christopher Nolan and was produced by Emma Thomas, Charles Roven & Christopher Nolan. Storied by Christopher Nolan & David S. Goyer , the movie starred Christian Bale as Bruce Wayne / Batman & Tom Hardy as Bane. The Dark Knight Rises is a concluding sequel of the previous Batman movies including Batman Begins (2005) and The Dark Knight (2008) in Nolan's Batman film trilogy. In this sequel, Bruce / Batman has to lock horns with a mercilessly ruthless & hefty mercenary with a wacky mask – Bane, who dons this Bane Trench Coat throughout the movie. This Bane Dark Knight Rises Coat has been purposefully created by the fashion designers to offer Bane an outerwear, which has a perfect go with his villainy character.
About the celebrity – Tom Hardy
Tom Hardy, complete name: Edward Thomas "Tom" Hardy was born on September 15, 1977 in Hammersmith, London, England. Hardy is a talented English actor known for his exceptional performance in Star Trek: Nemesis, Tinker Tailor Soldier Spy, RocknRolla, This Means War, Inception, Bronson, Warrior and particularly The Dark Knight Rises as 'Bane'. For an acknowledgement of his brilliant talent and acting skills, he has been honored with BAFTA Rising Star Award. His’ fans worldwide also recognize him with an outfit – Distressed Bane Coat, which he did carry in The Dark Knight Rises. His [] can be safely tagged as a masterpiece that is vowed to recall him over and over again. Customers Who Viewed This Product Also Viewed
This is modal content.